After weeks of anticipation following the explosion of popularity upon release, Apex Legends has officially announced the launch of the first battle pass. Season 1, The Wild Frontier, will be releasing along with the battle pass on March 19th, 2019 at 10:00 AM PST (1:00 PM EST). The newest legend, Octane, will be releasing alongside this battle pass. Octane does not require the premium battle pass in order to be unlocked. As seen with other games in the battle royale genre, the battle pass will feature 100 tiers of progression, and offer both a free and premium version with different unlockables.

How Much Is The Apex Legends Premium Battle Pass? 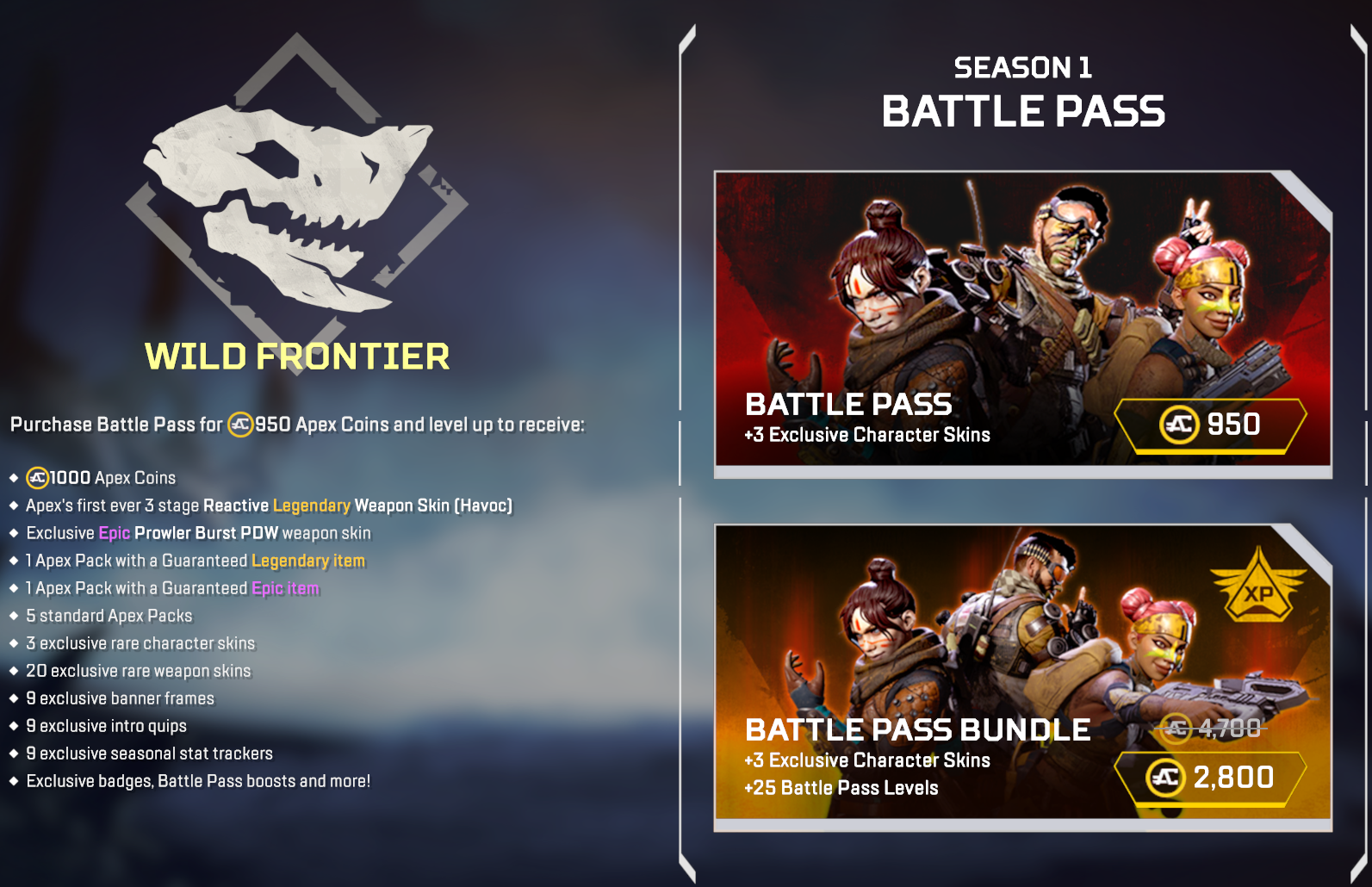 The season 1 premium battle pass for Apex Legends will cost 950 Apex Coins ($9.50 USD value) to unlock. Realistically, the cost is $10 USD, as the cheapest option for Apex Coins is 1,000 for $10 USD. There is also an option for a version of the premium battle pass that costs 2800 Apex Coins ($28 USD value). This option does not have any additional exclusive content but comes with the first 25 tiers of the battle pass already unlocked. There’s plenty of time to get through all 100 tiers without this option, so it is by no means a requirement, but it is a nice option for those who want to further support the developers and get a jump-start on unlocking the rewards from season 1.

Where Can I Buy The Premium Battle Pass?

The premium battle pass can be bought directly within the game. Simply start Origin, launch Apex Legends, and get into the game. From there, you want to navigate to the Battle pass section of the top menu, where you will be able to purchase either the 1,000 coin option or 2,800 coin option for the battle pass. If you need Apex Coins, those can be purchased directly in the game as well.

Is There A Free Battle Pass For Apex Legends Season 1?

How Is The Apex Legends Battle Pass Leveled Up?

Are There Daily and Weekly Challenges In Apex Legends?

Again this is an area where the Apex Legends battle pass is different from that of Fortnite for example. There will be no challenges to complete during the season 1 battle pass in order to level it up. Respawn has opted against including any sort of daily or weekly challenges through season 1 in order to allow players to continue to focus on the core experience of Apex Legends and it’s high-quality gameplay. While challenges are not completely off the table for future seasons, at this point there will be none to complete. Players will instead want to focus exclusively on playing the game to the best of their abilities and leveling up the battle pass through the experience gained in each game.

Will Player Level Reset With The Season 1 Battle Pass?

Player level will not reset with the launch of the season 1 battle pass. That means that if you are already level 100 (or any other level), you will keep that level and your current level badge in-game. However, player level will not be used for unlocking battle pass rewards. Instead, there will be two types of levels moving forward in Apex Legends.

There will be the current player level, which goes from 1-100 (and then continues allowing you to earn hidden levels beyond 100 with the reward of Legend Tokens). This means that new players or those who are not level 100 will still unlock the 45 total free Apex Packs from the 1-100 player level progression.

Respawn has not announced any exclusive rewards for reaching level 100 in the pre-season, prior to the launch of the first battle pass.

How Long Is Season 1 In Apex Legends? 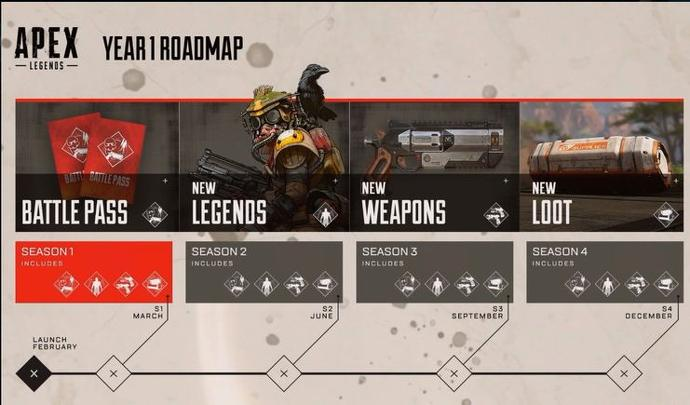 Seasons are planned to be about three months each in Apex Legends according to Respawn’s previously released roadmap. That means with the March 19th release of the season 1 battle pass, we should expect to see the season come to an end around mid-June. As Respawn typically likes to patch on Tuesdays, we expect season 1 to come to an end, and season 2 to launch, on June 18th, 2019. Keep in mind, that date is only an estimate, and no hard date has been set in stone yet.

Will The Battle Pass Pay For Itself?

What Are The Apex Legends Season 1 Premium Battle Pass Rewards?